Global movie company Technicolor’s new post production studio in Adelaide – its first in the Southern Hemisphere – is up and running. 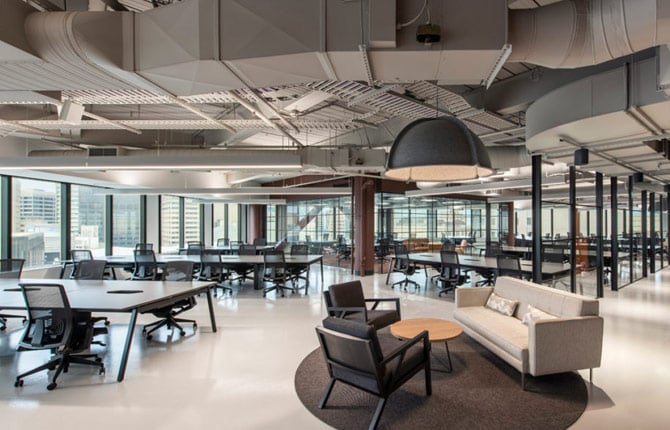 Operating under the Mill Film banner, the South Australian visual effects studio has already attracted 300 creatives from across the globe to its Adelaide headquarters in Terrace Towers, adjoining the Myer Centre on North Terrace.

Mill Film Adelaide, which aims to employ 500 people within five years, is divided across three floors.

There are six “view rooms” used to review work, a 40-seat theatre with 4K projection, “secret pods” with views across the hills and three kitchens – the largest of which gives way to a deck with a barbeque.

Mill Film Adelaide managing director Mark Thorley said the outside space was a large drawcard in choosing the building.

“It’s unique to have an area like this where you can come out and have some relaxation time and work together as a team,” he said.

“You can come have social events out here and take a meeting, do a video conference, get some fresh air, and the views are beautiful right?

Thorley said Mill Film wanted to create an environment unlike other post-production and digital effects studios.

“Our crew tend to be desk bound, behind a computer, and I think getting them outside in the fresh air, with sunlight, a bit of recreational space outside is a good thing,” he said.

“I think it’s important in the design of the building. We have created a lot of areas to have spaces for individuals to meet, collaborate, relax and work together as a team.

“What was also really attractive about this location was to be CBD based, close to transport, close to shops and services for our crew.”

Thorley, pictured below, said he first stumbled into a career in digital effects after landing a job as a financial controller in a post-production company. Twenty-five years later, he’s worked on feature films such as Kong: Skull Island, Rogue One and Avengers: Age of Ultron.

The Australian moved from Queensland to Adelaide for the position at Mill Film – something he was surprised more people don’t do.

“There are some really great landscapes,” he said.

The decision to locate the studio in South Australia followed a $6 million grant from the State Government’s Economic Investment Fund, which expects the project to have an economic benefit of more than $250 million over a decade.

The South Australian Government also offers a 10 per cent rebate for post-production, digital and visual effects work, designed to attract international film business. This is on top of a similar federal measure, set at 30 per cent of growth expenditure.

Technicolor announced it would build a $26 million, 3000sq m visual effects studio in the South Australian capital in February 2018. It had been operating out of a temporary studio since October 2018 and fully transitioned into its new space in June.

Thorley, said the decision to move Mill Film into Adelaide was also aided by access to talent and he expected to reach the goal of 500 creatives in Adelaide much faster than the five-year timeframe originally forecast.

“Australia has had a rich history of good visual effects and talent and I think over a number of years many Australians have gone offshore to continue their careers in visual effects, so this was a great opportunity to bring those Australians back home,” he said.

“We’re about 55 per cent Australian and we’re doing a lot of work in training local Australians.

“We run the Technicolor Academy here in Adelaide, which really focuses on animation, lighting and environment work.

“We look for young talent who have had some experience, whether that be from an educational institution or just naturally talented individuals.”

Mill Film is currently looking to fill almost 40 positions in a range of roles such as junior animator to visual effects supervisor.

The studio joins a growing number of post-production companies in Adelaide, helping the South Australian capital emerge as a screen industry hub.

Others include Kojo, which worked on projects such as Top End Wedding and Hotel Mumbai, and Rising Sun Pictures, the visual effects producer behind many of the X-Men film.

E. Bennett Walsh’s upcoming Mortal Kombat film will also be shot in South Australia and is set to become the state’s largest ever film production.

While Mill Film Adelaide is the subsidiary’s only Southern Hemisphere location, the company has studios in Montreal, Los Angeles and a partnership with Technicolor Bangalore.

Thorley said it was important to be able to collaborate on projects that required size and scale with quick turn-around.

“I think the industry is changing a little bit and it’s all about globalisation and scale.”

Thorley said the Adelaide studio recently worked with Technicolor partner MPC in London to deliver its first significant milestone – 443 shots for the Dora the Explorer film, which has its global premiere this week.

“You’ll see some great character animation in there and really slapstick humour, something that supports Dora in her journey and brings laughs to the screen,” he said.

“We have a fairly standard visual effects tool set here: animating in Maya, lighting in Katana, rendering in PR man (Pixar’s RenderMan) – so nothing out of the ordinary.

“The technology was used to make the performance nuanced and subtle and provide the audience with moments of laughter, that was the goal for our animators and they really rose to that challenge.”

The new studio is also working on films for Paramount, Universal and Amblin.